The Covid 19 epidemic has had multifarious impacts on the world economy and the Indian SME sector which is still in its budding stage is in no way immune. In this article we will shed light on the condition of the Indian SME sector during and post the Corona Pandemic. The SME sector has consistently been one of the largest contributors to the GDP of this nation striving to take a seat in the league of ‘developed’ nations. Much has been enthusiastically said about the startup hub that India has been developing itself into with a growing interest of national and international venture capitalists and government led programs like Startup India. The nature of the virus is still being studied and a stable vaccine would take around a year to develop. In such a scenario there is an unprecedented threat to Small and Medium Sector Enterprises as they would be the first to be impacted visibly. The factors of the impact are discussed below. 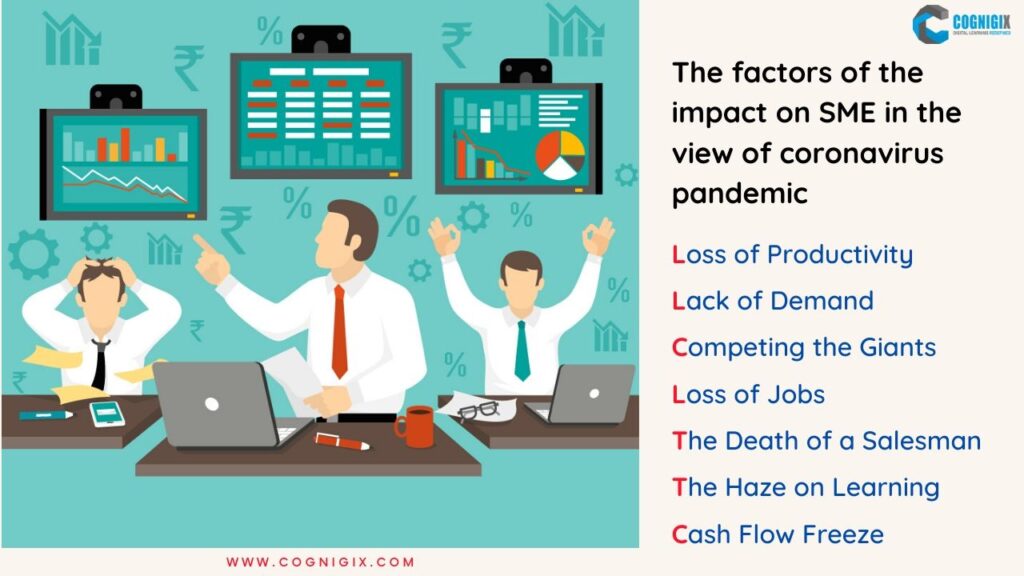 Loss of Productivity: The loss of productivity is a given considering that government public safety regulations make work from home during the pandemic compulsory. While the businesses in the manufacturing sector lose out clearly due to absence of labour, the other SMEs where there is a possibility of work from home lose out on productivity because of employee negligence, unavailability of the necessary infrastructure, lack of coordination, lengthy response time and most importantly a diminished will to contribute. This means loss of supply, loss of revenue and hence stagnation of any growth whatsoever.

Lack of Demand: We are entering a phase of economic depression induced by the Covid 19 epidemic. There is consequently a shrinking market as consumers tend to focus on survival first and comfort takes a back seat hampering the business of the SMEs. Also many SMEs are not able to provide home delivery services which soothes the customer’s sense of contactless safe delivery. Thus, not only in the B2B segment but also in the B2C segment the SMEs are suffering lack of demand leading to stalked and unprofitable supply detrimental to the producers sentiment.

Competing the Giants: Giants like Amazon, D Mart, Flipkart etc can easily sustain the losses considering the thick cushion of capital. Many of these companies had also opted in for highly expensive epidemic insurances decades in advance. So they create unfair competition for the smaller players in the market throttling their trade potential even more.

Loss of Jobs: The SME sector is one of the largest employers in the indian economy contributing to over one fourth of the GDP and employing the largest chunk of the semi skilled and unskilled blue collar employees. With the epidemic full control, there is a chance of job losses to go up to as high as above 40 percent in an India which is already suffering the severest unemployment and underemployment rates in three decades.

The Death of a Salesman: The corona outbreak is not only prone to effect the factory workers but also the salesmen who have enabled product delivery to the concerned customer for a long time. With falling demand and shrivelled supply, paying the salesman is a liability that SMEs can hardly sustain as their budgets get tighter and tighter.

The Haze on Learning: A short sighted view of the situation might suggest that it is useless to spend on the learning needs of the employees while companies with a vision to sustain would invest in learning and development as this vertical can easily be taken care of in the digital environment and also helps employees maintain a sense of potentiality and self worth in these tough times. Thus visionaries would be willing to cut through the haze of learning and support their employees’ learning needs.

Cash Flow Freeze: With the epidemic gloom in the market persisting, there is a high chance of depleting or even stalled cash flows within the small and medium sector enterprises. Borrowing is going to be difficult and expensive unless the government intervenes with relief loans to keep its SME sector afloat. Entrepreneurs need to depend a lot on goodwill borrowing which is limited in scope in hard times like this.